Or as we like to call it in Minnesota, Third Winter.

Here's the thing, you guys. Right around this time every year, you can usually find me shuffling around in oversized sweatshirts, clinically depressed, and muttering not-so-family-friendly things about the weather and life and what's even the point of it all.
(On paper, my doctor calls this "low Vitamin D". Hm, ya think?)

However, I'm pleased to report that even though there is a few inches of snow covering my yard and it's 18 degrees out today, that I am not flying over the cuckoos nest yet!
It's a Spring Third Winter Miracle!
I have a few theories as to why this year might be different from years past:

1.) We haven't had many Spring Teasers.
Spring Teasers are (I just now made this up) those days or even weeks, early on in the year, when it's super nice out even though winter still has quite a few tricks (months) up it's sleeve.
And when you have 60 degree days, with green grass and bubbles and sidewalk chalk and flip flops, IN FEBRUARY... it's just cruel. A cruel tease, meant to lift you up and then drop you back down. And while we usually have those days sporadically around this time, we really haven't had any extreme bouts of nice weather this year, which I think helps our expectations and our hopeful Minnesotan hearts. (Or at least mine. This might be doing the exact opposite for a lot of other people.)

2.) My kids can finally get themselves ready to go outside BY THEMSELVES.
This is a huge deal. Especially when you've spent the last 6 years putting on everyone's snow pants, everyone's shoes, zipping up everyone's jackets, trying to get every tiny thumb in that stupid part of the stupid mitten, and then FINALLY, after all that...immediately taking it all off because they forgot they had to pee.
(I need a nap just thinking about it.)

But the days of mitten chaos are coming to an end in the Johnson household, thanks be to God.
My kids can do most of all that by themselves now and can even play outside by themselves without me! Which is a mutually beneficial situation considering that while they might be totally willing and enthusiastic to trudge through the snow in below freezing weather FOR FUN, their mother has enough self-respect to not feel any burden to put herself through that. To each his own!

Anyway, I don't know whether this year is just a fluke OR it happens to be a turning point with the ages of my kids OR maybe it's a sign that I've finally now, after 7.5 years in this state, acclimated to life in the frozen tundra OR maybe it's just that I've been dealing with enough other hard things in life that getting 6 inches of snow right after Easter just doesn't even phase me right now!

I think I derailed a little bit there...Where was I?

Oh ya. Third Winter.
Anyway, for whatever reason, I'm hanging in there and haven't given up on life yet.
(But if it's still like this in May, all bets are off. Send help.)

So here are some things I've been enjoying as of late, in spite of it all: 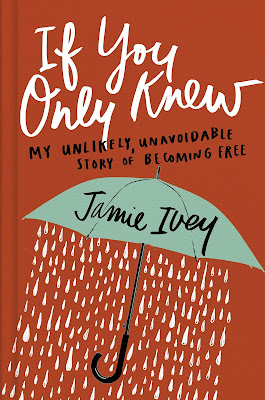 1.) If You Only Knew by Jamie Ivey

Come close, and listen to me.
I'm your friend and promise to only tell you the truth. So here it is:

YOU NEED TO READ THIS BOOK.

Jamie Ivey is the host of the podcast The Happy Hour and in her fairly new book, she shares her  testimony of her walk with Jesus and it's incredible.
But honestly, the most beautiful, incredible thing about her story is how not incredible it is.
I say that, meaning that it is essentially my story. And your story. And our sister's story.
This common story of being raised in or around Christianity, but wrestling with what that meant for our secret struggles and our raw desires. And what those struggles and desires look like on the outside in Christian environments! And how the realness of the Gospel plays into our most shameful moments, both past and present.
If you are someone with a sordid past, whether God has brought you healing from it or not, this book will make you love and appreciate the road God has walked you down and remind you of every step that He was there for.
If you are a serial goody-two-shoes who can only relate to "respectable sins", this book will bless you and deepen your love for your sisters and God's amazing grace.
If you are someone who desires your relationships and Christian community to be marked by vulnerable transparency, where there is no room for facades or veneers of perfection, this book will breathe life into you and inspire you to take those steps of courage.

WILL YOU PLEASE JUST STOP EVERYTHING AND READ THIS BOOK?

True story: I lent it to my friend, Tonya, pretty much the second I was done reading it and I had talked it up to her just as much as I just did to you, and you know..she nodded her head and took it, but then the next day I got a text along the lines of "OH MY GOSH I CAN'T EVEN WITH THIS BOOK, IT IS AMAZING AND I AM IN TEARS AND JESUS IS BEAUTIFUL"

See? Would I lead you astray?
Be a good friend like Tonya and take my recommendation. 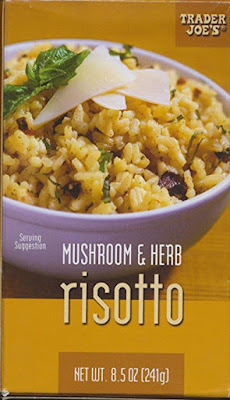 On a lighter, more gourmet note, this risotto from TJ's is amazing.
I've been making it for years, because while I've made risotto from scratch before, I also have a deep love for cutting corners and saving time and being a big, fat cheater.

(I love you, Ina Garten, but no. Life's too short to buy the good vanilla all the time.)

This box of delicicousness only costs $2.99, and it feeds 4-6 people as a side dish.
I usually always serve it next mustard sage chicken thighs and either a salad or sautéed brussel sprouts with bacon. Yummmm.

And when you're ready to serve it, if you add a dab of butter and sprinkle some parmesan on top, it tastes like heaven and rice had a baby.

Get it at your local Trader Joe's, and then have me over for dinner. 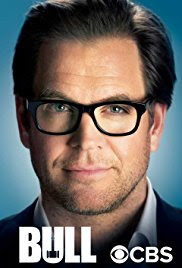 So Luke and I don't actually have cable TV, because it's expensive and why do we even need it?
(Actually how does anyone even need it in the era of Netflix, Hulu, and Amazon Prime?)
But I'm blessed with parents who generously let us use their Amazon Prime account to watch stuff on.

(I'm convinced that half the reason they spoil me so much is out of relief and thankfulness that I didn't turn out to be a total hot mess of a daughter and that I gave them some cute grandchildren.)

(Both of those factors were a little up in the air for a while there in those sketchy college years.)

Anyway, so Mom and Dad got this CBS 'All Access' subscription on Amazon, and we've all been able to catch up on some of our favorites (like Blue Bloods! In case you didn't know, I loooooove Blue Bloods.) and try out some new shows, like Bull.

I've wanted to try out this show ever since it started, because I've been a huge fan of Michael Weatherly ever since he played the adorable Tony DiNozzo on NCIS. And he is, of course, just as amazing in his new character as Dr. Jason Bull, a "trial scientist" (aka Jury Consultant.)
Essentially, Dr. Bull (a psychologist) has his own firm, which gets hired by lawyers and such, to help them win their cases in court. He carefully and systematically selects jurors and then helps the legal team in presenting the truth of the case, in a specific way that specific jurors can relate to.
The show is fascinating, the way it dives into the psychology and motivation of people's minds and how we are willing to see a situation through the lens of our own experiences.
In general, I only devote myself to shows and movies where the main characters have integrity and strive for doing "the right thing" for whatever their situation, so I appreciate that this show bears that same quality, and isn't super dark or unsavory.
(Basically, I'm a sensitive soul and I found out early in life that if I don't keep my entertainment on the lighter side of things, I will spiral into a state of misery and despair.)
(See: low Vitamin D.)

Anyway, if you actually have cable or a subscription service or you go to shady websites that let you watch current TV for free, Bull airs on Tuesdays on CBS at 9/8 central. 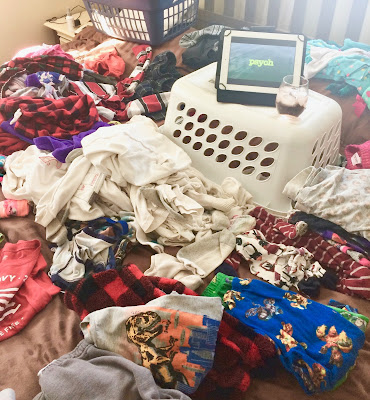 I am a fervent believer that there are real and mighty demonic forces at work in the spiritual and physical realm of laundry.

Laundry just sucks.
It's literally NEVER done. Ever.
Because even if you washed every single clothing item in your house, which is an amazing feat in and of itself, there is still the clothes that you're wearing remaining.
It's the Mad Hatter's bottomless teacup. Always filling, never full.
And every time you add a new member to a household, your laundry somehow quadruples!
Mathematically, it makes no sense. Thus proving my point:

Satan is at work here.

But because I am also a believer in the value of spiritual warfare and the occasional exorcism when need be, I started a new system at the beginning of this year - Laundry Day.
I know a lot of people who use this method to tackle the beast, and it's pretty silly that I had never implemented it before. Instead of doing continuous loads of laundry all throughout the week whenever there is time, I commit just one whole day (Friday!) to get it all done.
Wash, dry, fold, put away. All day long.
I don't make plans, we don't go anywhere. Just laundry, all day.

And you know what? It's been awesome.
Even though I've never had a hard time with actually putting in loads in the washer and dryer, those clean clothes would have a mysterious way of just staying in their baskets, becoming more and more disorganized as they were haphazardly pillaged throughout the week.

This new arrangement solves that problem, and also the problem of me feeling guilty about anything.

"Oh, are you already all out of clean pants even though it's only Wednesday?
Um...how do I put this... tough luck!
I held up my end, so maybe you should think twice about changing your outfit 4 times a day."

And in the afternoons when my bed is covered in clean clothes waiting to be folded, if my kids are busy playing (or trudging through snow), I'll usually put on a show or a sermon to listen to and enjoy a white wine spritzer while I sort.

(As an adult I find that it's important to reward ourselves with little prizes here and there, amidst all the monotony and responsibilities of life.)

Example: The first time I started Laundry Day, we had just had the stomach flu so I ended up washing, drying, and putting away THIRTEEN LOADS OF LAUNDRY. Where is my prize? 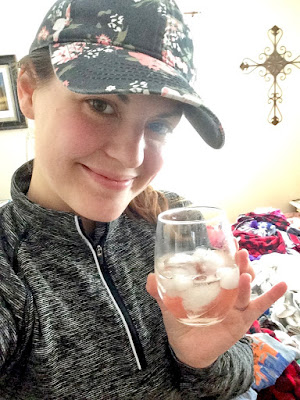 This is where we'd hashtag "Rose' All Day" if we were going to.
Probably because "Rose' In Moderation And Always In Accordance With The Legal Drinking Age Per State Legislation" just isn't as catchy or cute to put on a t-shirt.

(Whatever, I'd wear that shirt.)


That's all for now, have a good weekend friends!

Posted by Elise Johnson at 6:14 AM