If you've read any of my last few posts, you know that life has gotten a little heavy for us as of late.
It's definitely felt like a lot to face and deal with all at once, but God has been so good and so faithful to carry us through it.
And we've also officially entered the best season of the calendar year, which seems like a timely reminder to enjoy some of the beauty of life in the midst of the storm. 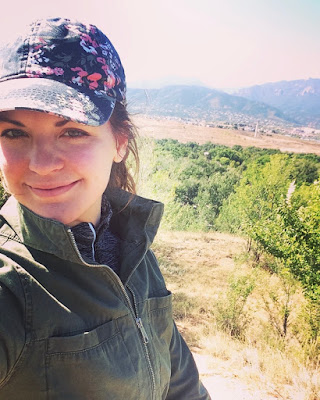 I'm writing this from Colorado, while I help take care of my mom after the hysterectomy she had a couple days ago and to make sure that my dad doesn't starve to death.
Even though cancer isn't anyone's preferred reason to make travel plans, it's already been so great to spend time with my family and take in the stunning mountain scenery again. The timing couldn't be more perfect to have a quiet weekend away to take a breath and recharge.

And while I'm doing so, I wanted to share some of the most recent things that have been bringing me joy, even amidst all the craziness:

Confession: The vacuum that Luke and I had been using for our entire marriage was one that he had gotten as a housewarming gift DURING COLLEGE. Just to give you an approximate time frame of how long ago my husband was 19 years old, this was pretty much The Original Vacuum Cleaner. It was huge and heavy and dirty and barely sucked anything up. After years of lugging this thing around my house, I had so much resentment in my heart towards it that it was time to finally upgrade.

We went with a Shark, because of how many friends and family have and absolutely rave about them. And let me just say- they were not wrong! I LOVE THIS THING.
Here's why:
-It's super lightweight (under 10 pounds)
-The suction and cleaning power is incredible, it actually pulls you forward a little bit when you have it on the highest setting, which is impressive for something so compact.
-The swivel head makes it very easy to maneuver around and underneath furniture.
-The duo brush system vacuums every surface, so between the two power levels it offers, I basically do my entire house in one fell swoop- including the hardwood floors, linoleum, tile, rugs, and high pile carpets.
-It has a quart-sized dirt bin, which could not be any easier to remove, empty, and put back. Which I do often, because it sucks SO much dirt up.
-It easily detaches from the floor pedal and the stick, and becomes a handheld vacuum- working great for ceilings, upholstery, and curtains.
-It's quiet and has LED lights in front to highlight any unseen dirt and particles on the floor.

I am absolutely smitten with this vacuum and will pretty much find any excuse to use it.
I feel like someone who has come out of a really horrible relationship, but who has a new found love that makes me feel good about myself and life again. Swoon.


And YOU TOO can dump your bad vacuum boyfriend and find true love again!
Get it on Amazon HERE. 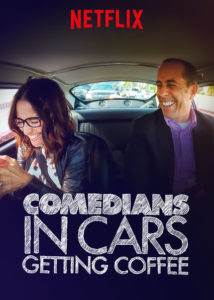 2.) Comedians In Cars Getting Coffee

Jerry Seinfeld hosts this amazingly original series which is sort of a hybrid of a talk show, that almost has a 'Making Of' Featurette feel to it, with a little bit of Top Gear thrown in.

In each episode (which range anywhere from 10-30 minutes, there's pretty much no consistency) Jerry picks out a classic car (that usually pairs with the personality of whoever his guest is), picks them up in it and they drive around and go get coffee.
That's it.
They do anything and talk about anything they want! They get serious, they joke around, they connect over food and movies and family and the life of comedy- nothing is off limits or predictable.
It just has this whimsically unscripted and weirdly down-to-earth feel, that I find so charming and appealing.

I was never really a watcher of Seinfeld, nor have I seen his stand-up, but after this show-I am just a huge fan of Jerry Seinfeld. He is so good at connecting with and having fun with all of these fellow actors and comedians, I think partially because this is his own little project, so he only has guests on that he actually likes and finds interesting! So there's this factor of authenticity that you just rarely see in any sort of talk show.
You can tell that he has so much respect and appreciation for all different types of comedy and characters, and is so good at perceiving and encouraging others in their specific talents.
One of my favorite things about him is how hyper-observant he is to all of the tiny little nuances and details that make for being funny. He's so genuinely entertained by all of his guests, that the laughter and fun they have together is just contagious.
So while I don't think that this is one of those shows that's going to necessarily be everyone's cup of tea, I think if you appreciate those things, you'll love it as much as I do.

Some of my favorite episodes were the ones with Will Ferrel, Tina Fey, Jim Gaffigan, John Mulaney, Steve Martin, Chris Rock, Stephan Colbert, Norm Macdonald.... gosh there's just so many.

Watch some of those and get back to me. I don't think you'll regret it. 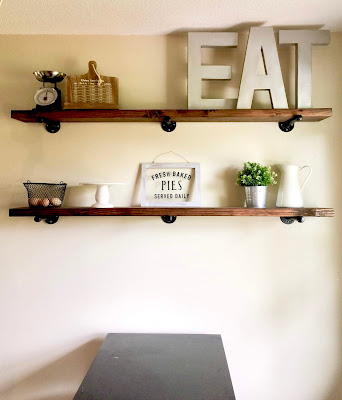 A year or two ago, I went over to my friend Stephanie's house, where she showed me an entire wall in her upstairs loft that she had turned into a library with huge industrial pipe shelving. Yes, the library itself was all very wonderful, blah blah blah, but what I became immediately obsessed with were the incredibly cool shelves that all of these books were on. I started dreaming and planning where I could incorporate shelves like that into my house, and decided that the big wall in my kitchen would be perfect. 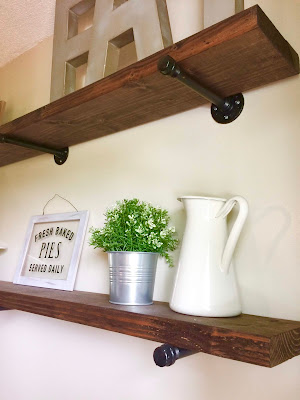 I love them so much.
They are each 5 feet long and 8 inches deep, giving me a ton of room to hold all of the decor and kitchen accessories that I want.
I bought the wood boards and the pipes from Menards (although they're both available for around the same price at Home Depot too) and spray painted the pipes black to give it the look I wanted.
I stained the wood with Minwax Dark Walnut (which is, in my opinion, the Beyonce of wood stains.)

As far as the decor goes, I got the plant and white pitcher at Ikea and the giant EAT letters from Hobby Lobby.
(Psst! They're actually CARDBOARD letters that I spray painted metallic! It cost less than half of would it would have if I had bought the actual metal ones, which cost around $30 per letter. And I'm giving you permission to be a cheater like me.) 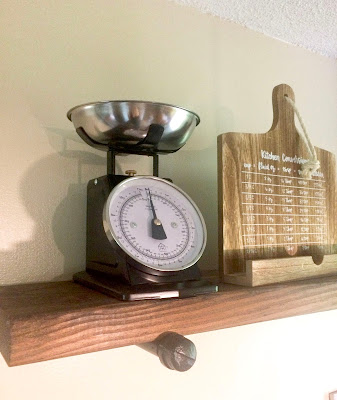 This adorable scale was my present to myself last week from Chip and Jo's line at Target Hearth and Home. It's classic, it's functional, and it's only 15 bucks. Sold!
The cookbook stand that has kitchen conversions on it is actually from the Target Dollar Spot right now! 3 dollars. Yes it is. Go get yourself one. 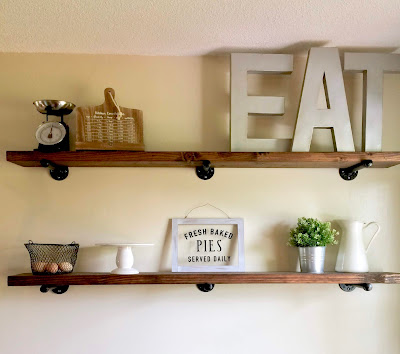 I just love the versatility of these shelves. I feel like they could work with so many decor styles and different rooms of a house. I actually have a small one in our guest room and am planning on adding one to the bathroom as well. I'll probably need an intervention at some point or they'll be on every wall! 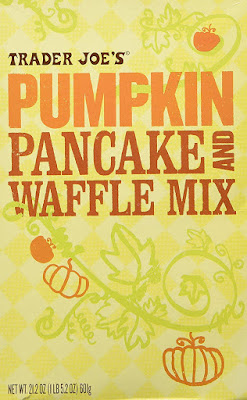 I was raised in a pancake family.
Pancakes have always been my dad's thing to make, to the point where he's even well known for it outside of our family. He has his own special recipe, always made from scratch, so I don't think I was actually aware that pre-made pancake mixes existed until I was a teenager. (I'll go ahead and pull my 'I was raised in Europe' card for that one too though.)
So obviously there is a little bit of pancake snobbery here that I was always bound to have when raised this way and I prefer them made from scratch.
HAVING SAID THAT, these pumpkin pancakes are amazing. I've actually made pumpkin pancakes from scratch before but prefer this mix. They're thick and fluffy and the perfect blend of spices to enjoy on a fall morning. And if you want to elevate them to an even fancier level, top them with a blend of apple butter and mascarpone cheese. To die for.

A box runs around $1.99 and is now available at Trader Joe's until the season ends, so get them quick!


That's all for now, I hope you can find as much joy in these as I have and that you are loving Fall with wild abandon.