Ex-Boyfriends and the Blood of Jesus 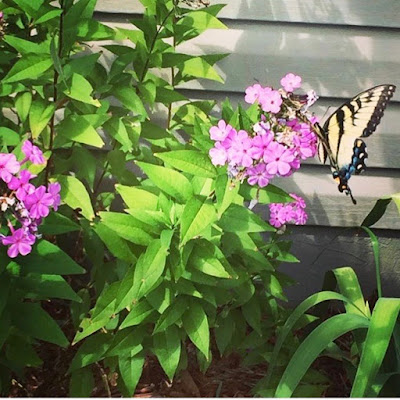 A couple months ago I flew to Colorado, to be there to support and help my parents for the art and music event they were having.
It was one of the first times in a while that I had been back there without my husband and kids, which made it easy to feel all of the nostalgia (and, consequently, regret) that comes with being back in the city where I spent so many of my formative years.

One of the days before my parent's event, my mom and I were running errands to get all that we needed for the reception. On our way into the entrance of the grocery store by her house, a guy walked out of the store and said "Hey, you want this cart?"
My mom said "Yeah thanks", took it, and they walked their separate directions.

And there I stood, almost frozen, watching this random and casual hand-off between my mom and MY EX-BOYFRIEND.

He was right there. Two feet in front of me.
They didn't recognize each other and he didn't notice me.

I just stood there, like an idiot. Wide-eyed and motionless, all of my quick-wit and flair for on-the-fly conversation making were suddenly GONE LIKE THE WIND.
I watched him walk away, and not a single sound came out of my open mouth to stop him.

I staggered into the store behind my mom. "That was David!" I said.

"What? Seriously?!" We were both befuddled. What are the odds?

We went about our shopping, but I was still shaken. Why couldn't I just say something?

I don't know even know what I would have said.
It's been almost ten years since we met. It was at an Irish pub that he bartended at, where I was drinking with friends. (Under age, mind you! HOW CLASSY IS THAT?!)
He liked me from the interaction we had that night, looked me up, and I agreed to go on a date with him. We dated for a few months and enjoyed each other's company, until I eventually broke up with him. Twice, actually.
(Quick Pearl Of Wisdom: Getting back together with someone who you've already dumped for legitimate reasons is generally not wise.)
(And if you need me to needlepoint that on a pillow for you, I will.)

But the bottom line was that he loved me and although I cared for him, I didn't love him back. And that's a crappy feeling to walk away with.

The pit in my stomach that seeing him again brought stayed there for a couple weeks.
I mentally kicked myself for not saying anything. But what would I say?
Hi! How are you? Sorry I broke your heart! Bye! I don't know.. SOMETHING!

I went back to Colorado a month later, and when my dad and I happened to go to the same grocery store as before, I found myself looking around for him. I don't know why... it's not like he works there. I think I was just looking for a second chance.
But I didn't see him and I didn't get that chance.

I came home, still feeling annoyed with myself over this missed opportunity, and I cried out to God.

"Ugh. Why didn't I just say something??"

And what I felt from the Holy Spirit and His Word was this:

"Why do you need to? Why are you trying to earn forgiveness for something I've already paid for?"

Just like Jesus would.
Piercing our hearts in the hard places that He wants to break and heal back stronger.
And He was absolutely right. I wanted to tie up loose ends that weren't in my power to tie up and maybe weren't ever meant to be.

I saw this guy and just let myself feel haunted again by all the regret and shame.
It was regret that I dated him even though I never intended to marry him, and that my selfishness and boredom hurt someone. I had been hurt before in much similar circumstances, by someone who was bored and selfish and didn't love me the way I loved him. So I knew that pain and didn't want to feel guilty about being the one that caused it this time.
It was the regret and sadness that I spent those years of my life running from God (not that you can actually do that.) That I used drinking, smoking, pills, and the constant company of men to anesthetize the cloud of depression I lived in, the brokenness in my home, and the hurt I felt from the Church instead of crying out to Him daily and letting His Word make me whole. (And finding a Christian community that actually was safe.)

After years and years of His intervening grace on my life, He's made me a very different person than I was back then. New, even. He has healed and forgiven so much brokenness and shame, has softened my hard heart, and is continually growing me in what it looks like to give my burdens to Him DAILY. And He has used the Church to heal my wounds from the Church.
Even though I barely recognize the Old Elise, God still loves me too much to let me have a moment with an ex-boyfriend that could tempt me to feel like I get to earn some of my redemption. He gets all of the glory for the work He's done in my life, as it should be.


I was talking with someone recently about our human inclination to feel like part of the process of healing is to forgive ourselves from past sin.
But the fact is that WE JUST CAN'T. No matter how hard we try.
We have no ability to forgive ourselves for the sin of our hearts and our bodies and our words, because it's not a debt against ourselves and we haven't actually paid for it.

The debt was against God. And not us, but Jesus, paid for it. And His blood was enough to cover it all.

That, my friends, is the sweet sound of amazing grace.

I think sometimes we hate grace. Because we feel too good for it and our pride loves to feel like we've earned as much and deserve even more. Or because that same pride makes us feel like we're too bad and too ugly and too far gone to be saved. Like our darkness is somehow stronger than His light.

But His light is stronger. The nails in His hands were necessary. And His Blood was enough.

As painful and uncomfortable as it can be, I'm so thankful that He lets us feel the need for Him in our lives. And that He is so faithful to remind us of and flood us with His grace over and over again.

It's time for me to move on, feel free to join me.
We don't need to be hung up on the past anymore. If anything, we use it to display how beautifully stronger His light is than our darkness.
We can ask Him if there's anything we need to do or change or anyone we need to repent to, and then beyond that.. it's all Him.
We wash our face and look forward and trust that He will redeem it and that it's all been paid for.

Because His blood was enough.

Therefore, if anyone is in Christ, he is a new creation.
The old has passed away;
behold, the new has come.
2 Cor 5:17
Posted by Elise Johnson at 8:06 AM