Current Faves: Can It Be Spring Now? Edition

Well, it's that time of year again.

We are post-holidays but pre-spring, so here in Minnesota, we're all trapped in seasonal limbo where we have to make peace with the fact that it's just going to be cold until it isn't.

Some people make that peace just fine (...I mean, I don't know who they are.. but I assume they're out there) and some people (Hi!) have to fight extra hard to not slip into a seasonal depression coma with lots of exercise and weird vitamin supplements that their mom sent them.
(Thanks Mom! ..These are legal, right?)

And in between all of the waiting and the cold and the weird supplements, I have been enjoying a few things, namely:

My sister-in-law recommended this Netflix original movie (with a ridiculously long title) to me last year, and I finally watched it on one of my flights to Utah a few weeks ago. You know how every so often you watch something that becomes an instant all time favorite? This was that for me.
Set in the post-WWII era of Great Britain, it follows a young female writer who is struggling to enjoy the new normal now that the war is over and she's gaining success as an author. She ends up traveling to the island of Guernsey and befriending the members of a book club there, while also trying to unravel the mystery of what happened to one of their club members.

I really cannot understate what a stunning film this is.
The whole movie, literally every single scene, is captivating and beautiful, from start to finish.
It's so rich in visual beauty, between of all of the little details like old book pages and flower petals and typewriter clacking, to the grandness of the British coastline.
It's also so rich in it's heart-felt themes of a group of people finding refuge and hope and healing in community.
It's pure and charming and ends happily (which is an important quality to me for books and movies, and I will not apologize for that.)

I loved it so much that I literally came home from my trip to Utah, had my husband watch it with me, and then made my brother watch it again with me the next weekend. (They both also enjoyed it, by the way.) So I would say being excited to watch one movie THREE times in a two week period is a pretty strong testament to it's enjoyability level.

So go watch it ASAP on Netflix, and feel free to invite me over, I'm obviously down for another viewing.

So I've had a little crush on ukuleles for a while now and whenever Luke and I have seen or heard them for the past few years I usually mumble something like "Man, it'd be so cool to play the ukulele..." and apparently SOMEONE was listening and decided to get me one for my birthday.
Which is... so sweet. That guy sure knows how to earn points with me, and has become an awesomely creative gift-giver.
Funny Story: When Luke and I were newly engaged, for my birthday he got me.. struts.
FOR MY CAR.
I still don't even know what those do!
But apparently my car needed them and there is nothing more romantic than fixing a Toyota Camry for your confused fiancé.
So that little anecdote is proof, not only of how someone can make such a successful turn-around in the gift-giving department, but also the power of young, slightly blind love. Because there is no way that now, almost nine years into marriage, anything purchased at Napa Auto Parts would be considered an acceptable birthday gift.
Nope.

Anyway, back to my ukulele, Luke got me a build-your-own kit, so that we could do it as a project together and choose whichever stain/paint/decoration I wanted it to have. We've been working on it for the past few weeks and we finally got it done, which means that my family now gets to enjoy the beautiful sounds of their musically-incompetent mother try to learn a new instrument.

Aaaaand not to brag, but I almost have 'You Are My Sunshine' nailed down like a pro, so I'm pretty much expecting a call from America's Got Talent any day now. 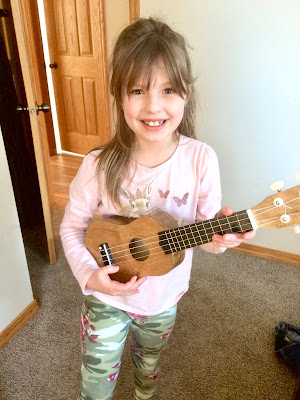 On Sunday, Vienna requested that we take pictures of each other with my Ukulele and I think she kinda looks like an American Girl doll holding one of those guitar accessories.
But way less creepy and with better bangs. 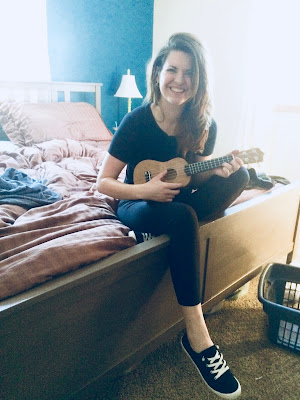 And here's a blurry picture of me, laughing at my daughter, who has inherited so much of my clumsiness, that she was literally tripping while just standing there taking a picture. Bless. 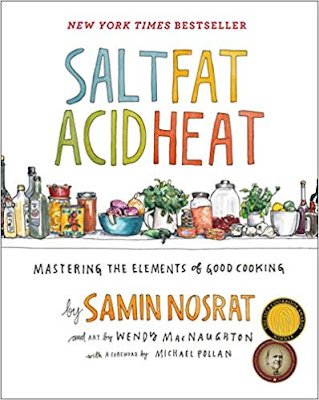 Speaking of great gifts that Luke has given me, for Christmas he got me a copy of Salt Fat Acid Heat (the book that inspired the Netflix special that I wrote about in my last current faves post.)

It is such a down-to-earth yet highly educational guide to, like the title says, master the elements of good cooking. I wish I had this book over decade ago, when I would sit in Barnes and Noble, reading cookbooks and bringing stacks of them home from the library (I still do those things.) I love food and reading step-by-step recipes, hoping to absorb as much knowledge of cooking and ingredients that I can, but most cookbooks really lack teaching actual food principles. They are great at instructing the What, When, and How of a recipe, but not the Why. WHY should I cut it this way or add this first or season it at this time?
I whole-heartedly believe that we should be asking Why? in both the small and big areas of life, a tendency of mine that I'm sure has exhausted plenty of people (like say, my poor parents and every teacher I ever had), BUT has also been the means of how my faith and beliefs and methods have been strengthened (if they're good and true) or weakened (if they're bad and false) time and time again.

Ok, I've derailed a little bit again, but here's my point- How will we ever really understand and enjoy and be confident in the purpose of something unless we ask Why?
Samin Nosrat is not only a talented chef, but an amazing teacher who does the incredible job of answering every Why? before we even know to ask it. She doesn't just want to give out recipes, but she genuinely wants to help us develop our own flavor instincts to build off of. Even though I wish I had this book years ago, I'm so happy I have it now, as a constant reference guide to how to bring out the best in ingredients and create amazing dishes.

I think everyone who loves food should have a copy of this, whether they love to cook or hate it. I would even bet that understanding the Why's and How's of food would actually produce an anti-cooking convert. Get it on Amazon HERE.

Last fall, I was hanging out with an old friend when I was in Colorado, and he told me that I desperately needed to watch the show Brooklyn Nine-Nine. I didn't know much about it, but the only previews I had ever seen for it hadn't ever left me particularly interested, and it sort of came across like a cheesy sitcom, so why waste my time? But he told me that it was "SO FUNNY" and I asked how good it was compared to Parks and Rec (which to me is the gold standard), to which he said, and I quote... "Oh, it's just as good."

And I gasped, because this lunatic was obviously uttering television blasphemy. How could it possibly be that good?

But fast forward to last month, I was in bed with a head cold and needed to mindlessly veg out on something, I decided to give this show a try.

You guys.
I am happy to admit that I ate a big, fat piece of humble pie that day because it turns out that my lunatic friend was ABSOLUTELY RIGHT.
It is soooooo funny. I laugh out during pretty much every episode.
And unlike a lot of shows, where you have to just shut your eyes and survive the entire first season before it finds its groove, the pilot episode of Brooklyn Nine-Nine will have you entertained and hooked right away. The show is centered in a Brooklyn police precinct, and the main character (played by Andy Samberg) is a naturally smart, talented detective who is great at his job, but has the maturity of a 15-year-old boy. Which just makes for good comedy.
If you love the clever and witty banter of Arrested Development, the pranks and shenanigans of The Office, and a group of lovable and unique characters who have a bizarre loyalty for each other like Parks and Recreation... I guarantee you will enjoy this show.

All of the seasons are available on Hulu.

Well, that's all for now.
I hope that one or more of the these little gems can spice up your life a little too while we wait for Spring. If all else fails, I can always come serenade you with a lovely rendition of 'You Are My Sunshine', which will FOR SURE put you in a better mood.

Posted by Elise Johnson at 9:34 AM