Current Faves: Am I The Last One To This Party? Edition

Hello, friends! I haven't done a Current Faves post in a while and it feels good to be back, although I'll warn you right now that most of these are not new things. Just things that I have recently discovered and fallen in love with, so I'm fully aware that my delayed enthusiasm might be met with a bunch "Yeah, duh''s, and I've made peace with that.
But on the off chance that you're like me, and don't keep up with every trending thing because you're busy rewatching old episodes of Monk living your best life, let me introduce you to some of my new delights and maybe they will become yours too. 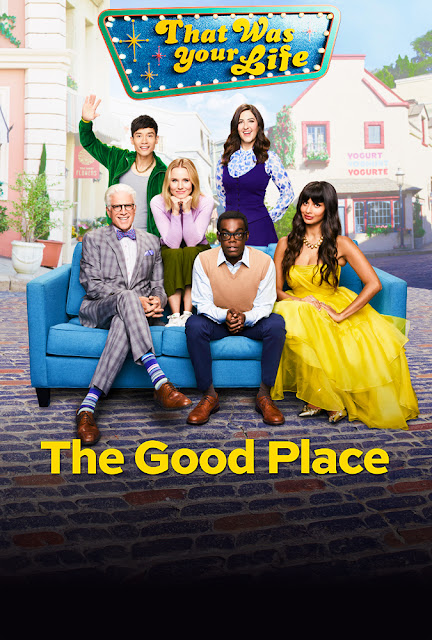 Alright, I'll admit that I didn't jump on The Good Place wagon until about a month ago, when the show was basically finishing up it's final season. Much like Brooklyn Nine-Nine, none of the previews I had seen for it really convinced me that it was anything to write home about. But when I finally did watch it, after my little brother assured me that I would love it, I was ALL IN, BABY.

First of all, I've never watched a show that takes so many twists and turns out of left field, and still maintains such superior quality. I mean, let's face it, typically when a show's writers decide to completely flip the plot upside down, it's usually out of desperation to stay on the air or just poor writing (looking at you, LOST. Or Rachel and Joey Dating!) and it usually bites the dust.
But it seems like we are pretty much always safe in the hands of Michael Shur, who also created The Office and Parks and Recreation, and was obviously just put here on earth to make us all laugh.

Second of all, the cast is STELLAR. Ted Danson and Kristen Bell are already national treasures who must be protected and preserved at all costs, but then there's the other 4 main leads of the show, who were more up-and-comers when it started and who have proven to be absolutely phenomenal. Each lead character is so perfectly (and hilariously) written and well-acted, it immediately draws you in and keeps you wanting more of each of their flavor.

I really can't give you a decent enough synopsis of the show without spoiling any of the twists, but please just trust me, my darlings, and know I would never lead you astray.
It's pure magic from start to finish and I wish I could sit on the couch with each one of you and watch you laugh and gasp and laugh some more.
(...That's not creepy right? I'm not only one who likes watching people watch things that I like? I never thought it was, but now that I write it out, I suddenly have Every Breath You Take by The Police ringing in my head and I'm wondering if I should maybe not emphasize my love for watching people so much..)

Seasons 1-3 are on Netflix and the 4th (last) season is available on YouTube TV (and probably a lot of other places because it's 2020 and Alexa runs the world.) 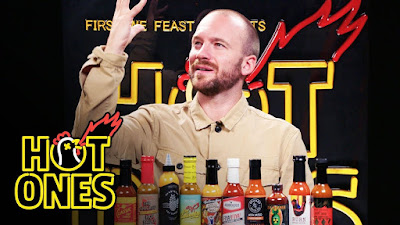 And speaking of being very late to the party, I didn't actually know that my favorite YouTube child, Hot Ones, existed until this past fall (even though it began back in 2015!) 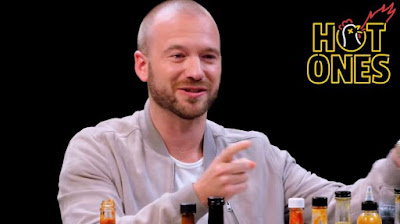 Sean Evans hosts this fantastic show, where in each episode he interviews a celebrity while they both eat a platter of increasingly spicy hot wings. So not only does the context of what they're doing (suffering through painfully spicy food) create this unique atmosphere of making the interviewee comically vulnerable, but the questions that Sean Evans asks are OUTSTANDING. The show obviously has an amazing research team, that dives into the subject's life/education background and career history so well that only the most interesting and off-the-wall questions are being asked and answered. But even while his guests are put a little off-kilter, what with the surprisingly thoughtful questions (which is probably more rare for them than not) and simultaneous physical pain they're experiencing, he also is so naturally gifted at putting people at ease and connecting well. 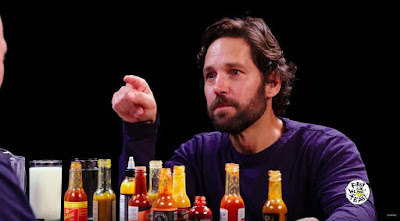 Some of my all time favorite episodes were Gordon Ramsey, Paul Rudd, Nick Offerman, Ashton Kutcher, Aubrey Plaza, Michael Cera, Dax Shepherd, Kristin Bell, Idris Elba and so many more that it's just silly to keep rattling them off. The likelihood that you've already seen or at least heard of this is pretty high, but if not, check out their page on YouTube and find one with someone you enjoy. I think you'll love it.

True Confession: I think this may be my dream job, you guys.
So I need your advice, can you think of anyone who is looking to hire someone to cheerfully interrogate people about random aspects of their life while eating? If so, please tell them that I'm a team player, very punctual, and not above getting paid in food.
Keep me posted. 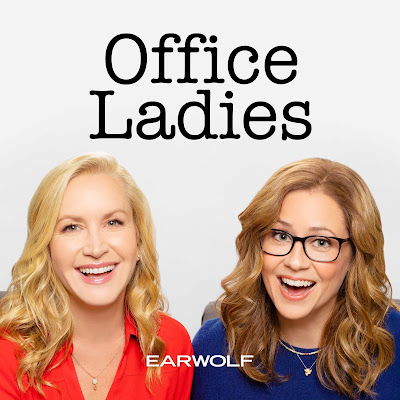 So technically I'm not too far behind when it comes to this one, because Office Ladies is fairly new and I started listening in once they had a couple episodes posted.
Angela Kinsey and Jenna Fischer started this adorable rewatch podcast, where they are chronologically doing a podcast episode for every episode of The Office and they talk about what it was like to film each episode. It's sooooo cute and fun.
First of all, Jenna and Angela are best friends in real life, which makes this even more amazing, not only because of the awkward tension their characters had on the show and the irony of that, but also because their banter in real life is just so down-to-earth and adorable. They encourage each other and tease each other and crack each other up and it just feels like such a gift to be apart of what they have and the perspective they give on what it was like on the set of such an iconic TV show.
For me, one of the most endearing aspects of their rapport is that they're such normal people. They frequently mention feeling dorky and out-of-place at big hollywood parties, or dealing with obnoxious actors who are "on" all the time, or the embarrassing learning curves of how to do red carpet situations. It's just all so charming, because they're so real about it.
They also have had a bunch of guest starts on to chat with them about whatever said episode they're on, like Rainn Wilson, Paul Feig, Creed Bratton, and Melora Hardin to name a few.

Anyway, as an Office enthusiast (who just rewatched all the seasons back in December), I've been so tickled by this podcast that gives so many behind-the-scenes views of what they went through to make each episode. Plus I am just a huge fan in general of a couple of women starting a successful endeavor, especially when they are still able to stay true to their authentic selves.
You go, girls.

I just dig this show, and I think you would too (if you haven't already gotten on board.)
Find it wherever podcasts are available, or on Earwolf for ad-free listening. 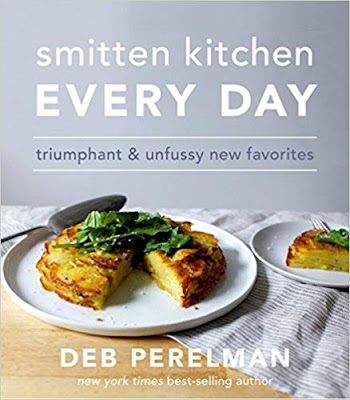 To go back to my theme of This Is Not New, You're Just Late, I'd like to tell you about the Smitten Kitchen cookbook that came out over two years ago, but I just got as a gift this last Christmas.
To be fair, I have been a disciple of Deb Perelman for years and even just following her social media accounts, when she gets out some chicken and says "jump", I get out my trampoline and say "Yes, Chef!"

I've made a couple of the recipes out of this book so far, but my all-time favorite has been her Street Cart Style Chicken and Rice.
Fun Fact: my friend Johanna made this meal for us a year or two ago and brought it over when we had a foster baby, and I'm pretty sure I was solely responsible for shoveling 90% of it down, and I always wondered what kind of dark magic she had started playing around with to make such a simple dish SO delicious. And now it all makes sense (in a non-sorcery involved sencario.) 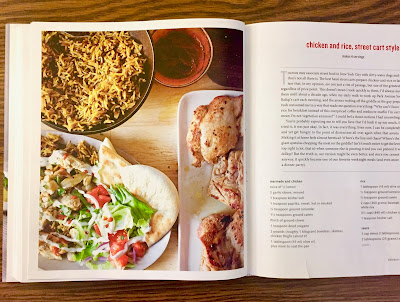 These chicken thighs, marinaded in a lemon juice/paprika/cumin/coriander sauce and then cooked in a skillet, alongside a flavorful turmeric rice, taste like SAVORY CANDY. I made this dish three times in one month, and my family was not only fine with it, they kept asking for it again. And all the friends I've made it for have asked for the recipe.
Let's face it, for food that doesn't have any illegal narcotics in it, that's SUSPICIOUSLY addicting.

There's a lot of quality food in this book, but it's honestly worth to buy just for this.
You can get it HERE on Amazon
(Or psst, you can just ask me for the recipe and I'll text you screenshots of the pages.)


Well there you go, I hope you've enjoyed thinking 'Been There, Done That, Elise' for the last couple minutes, but on the off chance some of this is new to you, I hope you check it out and it dazzles your whole world.
Posted by Elise Johnson at 7:48 AM No comments: