I'll be honest with you, it was a bit of a challenge to narrow down all of the possible titles for this Current Faves post, mostly because everything keeps changing so quickly! Some previous possible options were:

'Flights Are Super Cheap, Where Should We Go?' Edition

'Please Stop Yelling At Me, I JUST Washed My Hands' Edition

'My Hands Are Cracked And Bleeding, ARE YOU HAPPY NOW?' Edition

'How Do I Refund This Unusable Airline Ticket?' Edition

'It's Time To Stop Making Out With Each Other, Please Take This Seriously' Edition

'A Great Substitute For Toilet Paper Is Kale' Edition

'Jesus Is Obviously Coming Back, Why Are We Still Doing Push-Ups?' Edition

The list goes on and on. In the end I decided to keep it simple, but I thought you'd appreciate knowing how difficult this process was.

I will admit that so far, other than my kids forcing me to sit through at least 87 musical reenactments of Frozen 2 (I must say, they're either really starting to get good or I'm losing my mind sooner than I expected) and me having to repeatedly tell my son that we are not going to rename our dog "Fart", we've been doing surprisingly well. I've felt a lot of God's grace the past 2 weeks in the forms of my kid's playing really well together (a miracle in itself), the weather being beautiful, and just a sense of peace and hope that has kept me going one day at a time. I've actually really appreciated doing life in the slow lane, especially because of how busy we all tend to be.
Although we all know that too much of a good thing doesn't end well, so we'll see how long my sunny disposition will last before I go cuckoo for cocoa puffs and start buying dozens of feral cats online to be my new best friends..
Only time will tell I guess!

In the meantime, I'm happy to hunker down and let the amazing medical professionals do the hero work that they trained for at the Hogwarts School for Jedi Masters and Agents of SHIELD or wherever they graduated from, and pray that this thing goes away quickly.

Here's some of the things that have kept me enjoying this weirdly surreal season of life: 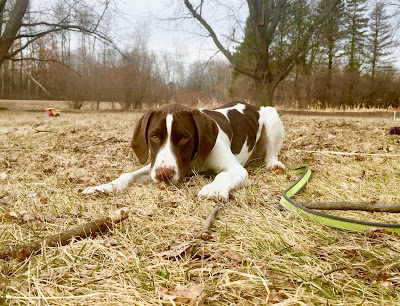 Any of you who keep up with me on social media know that we have a new addition to our household in the form of a Very Good Boy named Captain, and there could not have been a better time for him to join us! He's really settled in with us well, and we've had so much more opportunity to focus on house training and crate training him than if we were still the busy little bees that we were 3 weeks ago. He is such a sweetie and we absolutely love him.

Another reason this dog's presence in our life has been serendipitous timing, is that that it's forced me to go outside multiple times a day, and getting so much fresh air on all of these walks with him has been really good for my mental health.
(Also my physical health, because I've literally been baking almost every day, so unless I try to balance all of these delicious carbs out with some exercise, I'm going to look like Jabba the Hut when this is over.) 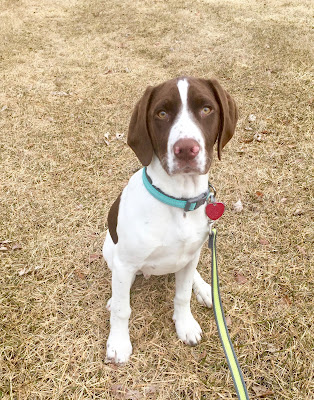 He's been surprisingly hard to take pictures of because he's fallen slightly in love with me, or at least that's what I assume the emotion is behind someone trying to constantly sit on your face, rendering photography attempts futile.
(But the feeling is entirely mutual, even though I express myself in much more dignified fashions. Like spending one of his first nights here sleeping on the cold, hard bathroom floor with him, in a puddle of his urine. You know.. that kind of dignity.) 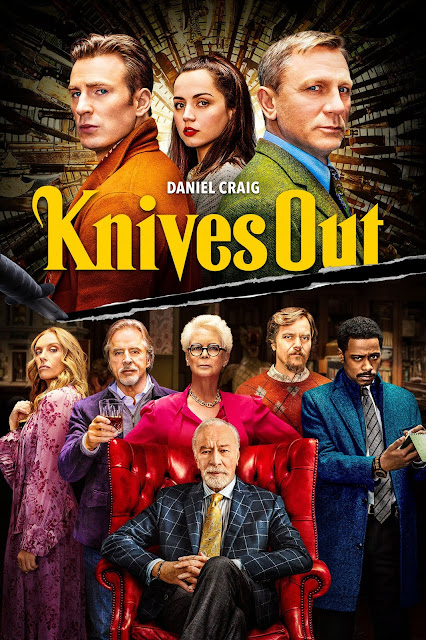 Oh, you guys. This was a good one.

I remember Knives Out being in theaters this last winter, around the same time that we were all going to see the last Star Wars (where was the stimulus package to get all of our money back from THAT, huh? Whatever, I'm over it.) and I couldn't wait to see it.
It became digitally available last week and let me tell you, we enjoyed every minute of it.

After the death of a rich family patriarch (Christopher Plummer), which very obviously looks like a suicide, a detective (Daniel Craig) joins the police investigation to interview the deceased's family and staff to find out what really happened. Seeing different perspectives of the previous night's events from each person who is questioned, you try to put the pieces all together of what actually happened, right up until the middle of the movie, when it shows how Christopher Plummer's character actually died. BUT THEN it becomes all about certain characters trying to keep the truth hidden, keeping you on the edge of your seat with twists and turns and a surprising finale.
The whole movie has the colorful excitement of a quintessential whodunnit, while still adding original intrigue and constant suspense throughout the story.
The cast of actors did amazing, and it was so refreshing for a modern movie to be made like a classic mystery, but with better writing and quality filmmaking, and still free of gore and smut.

You HAVE to see it. And may I respectfully point out...you have no excuse not to.
I mean, what else do you have going on right now? I say that in love.

Available to rent or buy on Amazon prime. 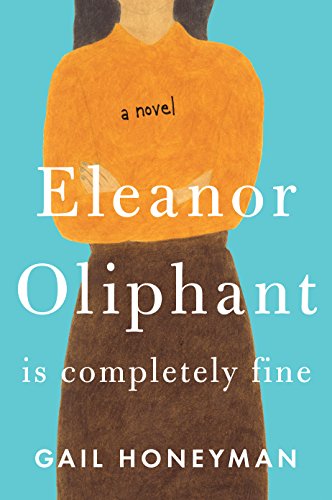 I had seen multiple people recommend this book over the past couple years, but it wasn't until my friend Karie grabbed my hand and with wide, crazy eyes pleaded with me to read it, that I jumped on the bandwagon. I recognized those very same crazy eyes, because I too wear them whenever I passionately try to talk someone into experiencing something that I just know they will love, so obviously I took her recommendation seriously.
And she was not wrong, you guys. This book is a gem.
Written from the point of view of an eccentric single woman, Eleanor Oliphant, it follows her thoughts and life happenings as her usually-consistent world starts changing for the better and she's slowly forced to confront the things in her past that have made her keep people at a distance for so long. The whole story is just charming and witty and weird and delightful, and you can't help but root for this odd, quirky heroine (who has some serious Dwight Schrute tendancies) and be overwhelmed with compassion for her as she stumbles through this sweet, hard journey of making a beautiful life for herself.

Get it on Amazon HERE either in actual book form, or audiobook (which a free trial is available for right now!) 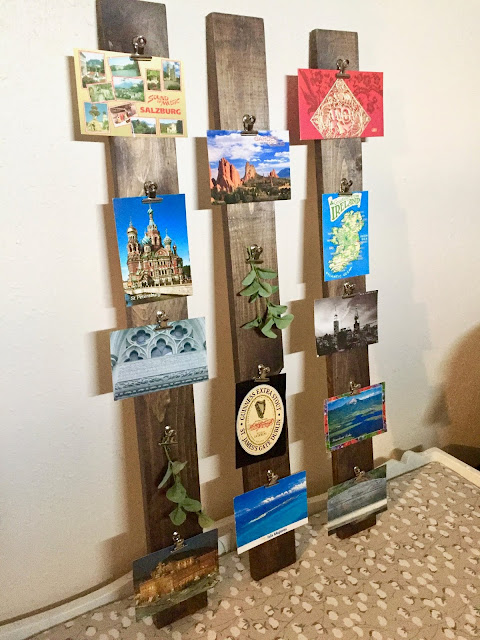 If there was ever a time in life to get our craft on... that time is now.

This particular project has been on my to-do list for over a year now, and I'm so tickled to finally have it done.
My guest room downstairs has a travel theme to it, and I really wanted a fun, pretty way to display a lot of the postcards that I've collected over the years from our different travels and the ones we've been sent by friends and family. I saw these boards on Pinterest and my search was over. 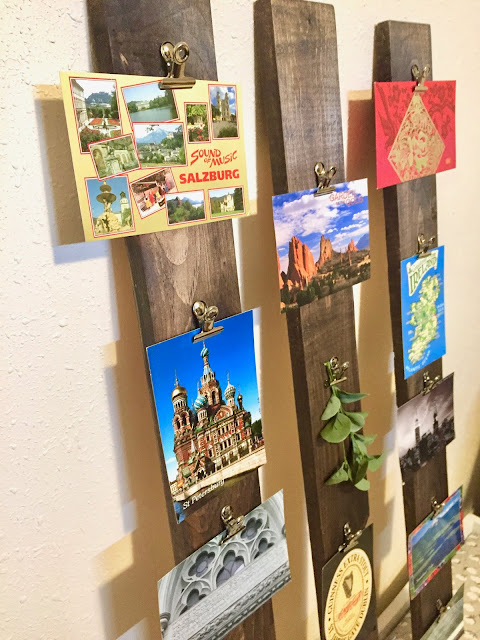 They're just stained 2x4's (but you could just as easily use pallets!) with bulldog clips tacked into them. So easy and fun and rustic. And I love that you could use them for displaying christmas cards or photos, I might even make more just for those purposes.
Here are links for the bulldog clips and tacks, and I have full faith in you to find the wood on your own. (So many jokes, so little time.)

Anyway, that's all for now.
I really hope that the next time I post about my current faves, it will be something along the lines of 'We're Finally Free!' Edition.

And hopefully not 'I Take Back My Advice, Kale Does Not Work' Edition.

Posted by Elise Johnson at 1:37 PM