I Can't Stop Farting in Pilates Class and Other Life Problems

1.) It's true.
The past couple times Luke and I have gone to Pilates class on Saturday mornings, I have audibly passed gas at some point during class. The first time it happened, thankfully the music was turned up loud enough, making it so no one could really hear it. But then the next time it happened, the music was quiet and IT WAS NOTICEABLE, you guys. So I did what any emotionally stable adult would do, and completely pretended that my problem didn't exist.
But then on the way home from the YMCA, I confirmed with Luke about how loud it was.

Me: So did you hear me totally let one rip in the middle of class?

Luke: That was you?! I wasn't sure who did that. People probably thought it was me.

Me: Aww, thats true! That does make me feel better. I guess that's a benefit of having a guy next to me... I can just blame you.

Luke: Oh if you do that, I will throw you under the bus so quickly. Don't even test me.

Vienna (from the back seat): You're gonna throw Mommy on top of a bus?!


Anyway, my advice to pass along is this:
Stop eating beef and bean enchiladas the night before you exercise in public.
Or just stop exercising at all. However you prioritize life. 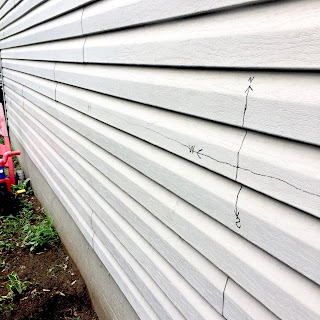 Apparently one day Boaz felt deeply convicted that our family needed to work on our sense of direction, leaving him with no other choice than to mark up the siding of our house with a permanent marker.
This nice new addition to our exterior decor runs almost the entire the length of that wall, but thankfully he at least got most of the letters right.
Except for the backwards 'S', but hey, let's not be nitpicky about the way vandalism is done! 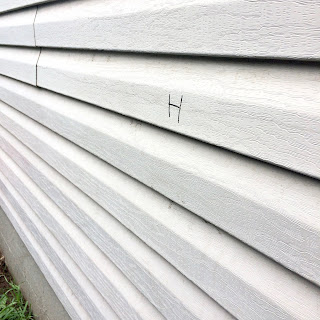 And then if you follow the compass to the west, you'll find the lesser known, but still important, direction: 'H'!

Standing for.... House? Hamburger? How many times do I have to tell you to not touch the sharpies?

3.) I almost broke my foot doing a cartwheel. 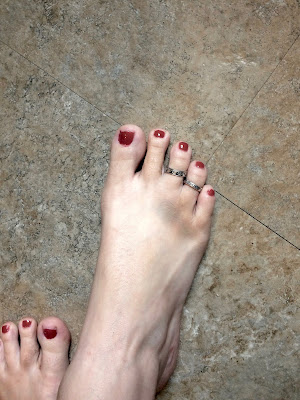 On this week's episode of Elise's Weird Bruises...

Vienna and I have been working on our cartwheels lately (which is already a poor idea for two people who live life with the grace and poise of Mr. Bean). In spite of that, after doing like fifty cartwheels, I was really starting to stick my landings better right up until the last one, where I somehow bent back my outer toes and ended up with a dirty-looking bruise on the top of my foot.

Which is obviously God's way of gently reminding someone that they are not in middle school anymore and to be more realistic about the hobbies they pick up.


The other day I bought a shirt from Mill's Fleet Farm.

We were there, buying our chicken feed and looking at electric fencing and then right there, in between their racks of insulated overalls and plaid flannels, there was a display of t-shirts that I actually kind of liked!

(Let's just take a moment right here to remember that I was raised by an opera singer and a hair stylist. We ate fancy food and drank wine and threw parties, and our idea of "outdoorsy" was eating and drinking said food and wine out on the deck. We attempted going camping once and ended up leaving early because being out in nature literally almost killed us. Half of my closet always consisted of an arsenal of cocktail dresses for all the concerts and galas we regularly attended. A closet, by the way, that was in a glamorous bedroom with the theme of Breakfast at Tiffany's.)

And then last weekend, in a new low for my life, our cashier at the redneck version of Costco, rang up two bags of chicken feed and a brand new t-shirt for me.

But here's the thing, the new low really isn't the shirt itself but how little I'm affected by where it's from.
That, right there, is the true test of how far one has fallen from class and sophistication.

BUT it did feel a lot like a 'Ron and April buying ground beef and dead crows at the Food'N'Stuff' moment, and that's just good comedy. 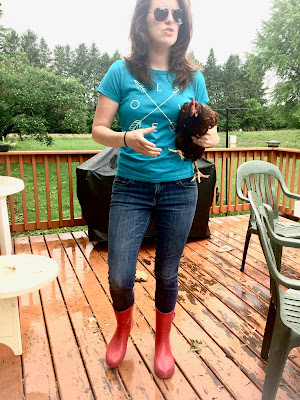 Me in my new favorite shirt. Holding a chicken, no less.

Life is pretty funny, the way it turns out, isn't it?