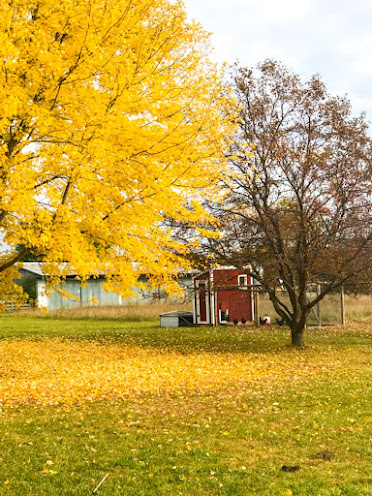 Happy Fall, Ya'll! (How could you not be happy during the prettiest season?)

Luke took this picture in our backyard yesterday, and we're just gaga about the view.

(Not pictured: the dead mums I like to keep around every fall out of prideful insistence that they *might* come back to life.)

I'm sure you're living your best apple orchard, pumpkin spice, sweater weather life; but I wrote about a few of my current favorite things to make this season even better:

EveryDollar is a budgeting system created by Ramsey Solutions to help people easily make a personal/household budget and manage their money. They have both a free version and a premium version that you pay for; and Luke and I have recently found a lot of renewed enthusiasm for budgeting using the premium version of the app.

1.) We can personalize our budget, by making or getting rid of or renaming any categories and items we want to, to organize it as specifically or generally as what works for our life and plans. And in addition to keeping or tweaking our set monthly budget, we can add those one-off's that come about, like a birthday or holiday or an annual membership renewal, stuff like that.

2.) With premium, the app is synced to our bank account, so all of our transactions (purchases, payroll deposits, automatic bill pay, etc.) show up once they hit the bank, and we can see exactly where our money is going.

3.) The user-friendly interface is fabulous, just the right amount of simple and straight forward, while still having all of our information right there. There is a drag-and-drop feature, so that when a transaction pops up, we can just drag it to it's category and boom, it's budgeted.

It's so quick and easy and, I'm not even that embarrassed to say, kind of fun.

4.) (one of my favorite features) You can split transactions.

So when a purchase from Target or Costco inevitably pops up, I can go in and split it between what I spent on Groceries, Clothing, Household, a Birthday, School Needs, etc. in that one big purchase.

Luke and I are both really enjoying how easy it's made budgeting for us and kept us both in the loop about where we're at and on the same page with it all, taking that added stress factor out of the picture.

And if there is any time to change up or fine tune a household budget, its right now, while everything is SO DAGGUM EXPENSIVE and with Christmas right around the corner. The right kind of budgeting should be something that puts you [and your partner] at ease and feeling the freedom to save and give and spend where needed and wanted.

We are loving EveryDollar, and if it seems like something that could be a positive tool for you too, get more details about it HERE. 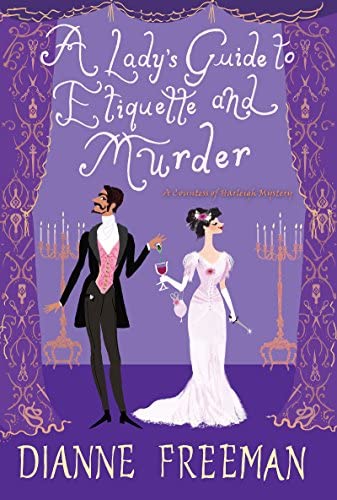 2.) A Lady's Guide to Etiquette and Murder by Dianne Freeman

(The Countess of Harleigh Mystery Series)

A librarian recommended this book to me this summer, and within two weeks, I had read the entire series. I loved them so much.

Set in Victorian-era London, this first book begins with the Countess of Harleigh (an American heiress and mother) coming out of her obligatory season of mourning, after her philandering husband died of a heart attack. He actually died in the bed of his mistress, but only the Countess and two other people (one of whom was the mistress) knew that, and together they had changed his location on the night of his death, to avoid scandal. Fast forward a year later, she is starting over in life and society with a new sense of freedom and independence. But when there is an anonymous tip to the police that she was involved in her husband's death, things become more complicated and obviously raise suspicions about who was really responsible for his death.

Dianne Freeman did such a fantastic job writing this book and their sequels. They have mystery (the right amount of keeping you interested without being dark or too cheesy), romance (the perfect balance of making you swoon, without getting smutty), and a very appreciated amount of female empowerment added (while still staying respectful and true to the culture of that era.)

Basically, it's exactly my type of fiction. 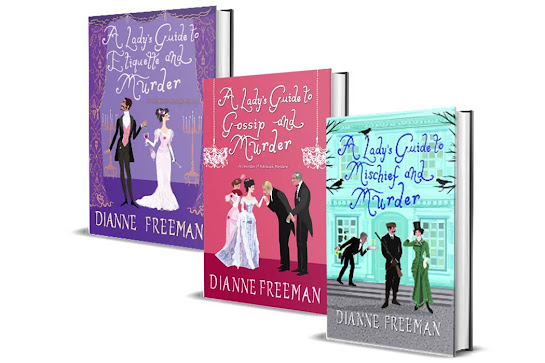 The subsequent books are:

A Lady's Guide to Gossip and Murder

A Lady's Guide to Mischief and Murder

A Fiancee's Guide to First Wives and Murder

A Bride's Guide to Marriage and Murder

and (coming this summer!) A Newlywed's Guide to Fortune and Murder

It's a delightful hybrid of Jane Austen, grown-up Nancy Drew, and a splash of Hitchcock. I think you'll love it.

Get the first book at your local library or on Amazon HERE. 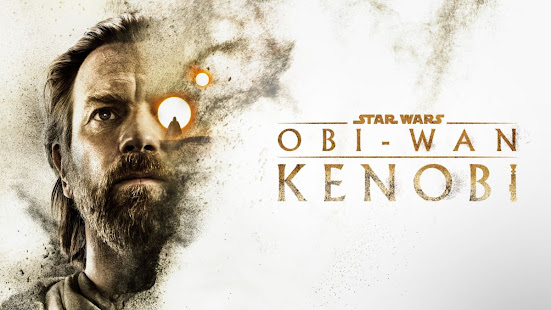 This limited series was released on Disney+ this last May, and I've heard some mixed reviews about it.

But here's the thing, I absolutely loved it.

We had rewatched Star Wars: Episodes 1-3 as prep (because as traditional Star Wars fans, we hadn't bothered watching those ones in over 10 years), so I felt ready and primed to experience whatever journey Obi-Wan Kenobi was going to take us on. Here were some of my most favorite parts (*Spoiler warning*):

1.) The initial set-up they did for the audience of what life was like for the Jedi, and specially Obi-Wan, ten years after Order 66 and the events of the Episode 3. It's such a testament to the impressive art direction, cinematography, editing, music, and acting on any TV/film, when it conveys so much information and storytelling with little to none dialogue. Within just a few minutes of the first episode of Obi-Wan, you quickly come to learn what a much more battered and discouraged man he is now than he once was, but you've also been painted a very clear picture as to why. You understand the pain of the exile he's in and also why he has to be in it, and all the aspects of the writing and filmmaking responsible for that was just gold. 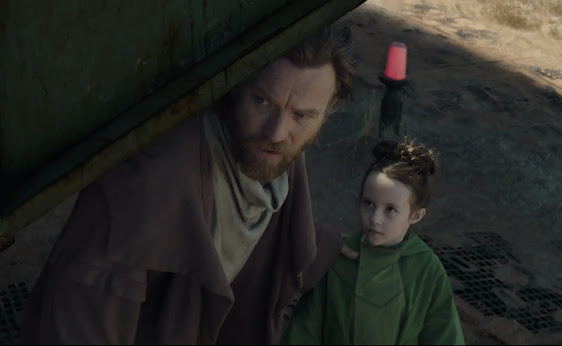 2.) Umm.. 10-year-old Princess Leia is the actual cutest person in the galaxy.

The adorably petite actress who played her, in all of Leia's enjoyable and infuriating sass, was absolutely spot on and you can't help but love her.

A fun, personal perspective about this was when I was watching young Leia in this, I kept thinking 'Oh my gosh, I was totally like this as a kid.'

"Spicy, kind of obnoxious girl with a big heart and rebellious tendencies, because of her passion for justice and adventure. "

Another aspect I loved was the bond that Obi-Wan and Leia forged during the series. I thought that one of the sweetest moments was when she asked him "Are you my real father?" and he says, with such earnestness, "I wish that I could say I was, but no, I'm not."

You can see and feel how disappointed they both are by that, not only because Obi-Wan wishes that she didn't come from such a dark legacy, but also because they clearly have a love and devotion to each other, like family at this point, and wish it were biologically true. 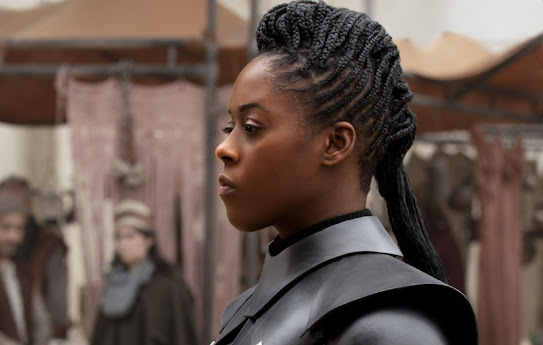 3.) Moses Ingram is EVERYTHING.

This entire post could honestly be a love letter to Moses Ingram, that's how much fan girl energy I have when it comes to this woman.

If you didn't already note her dazzling moxie in The Queen's Gambit, you will have noted it right away in Obi-Wan Kenobi because HOW COULD YOU NOT? 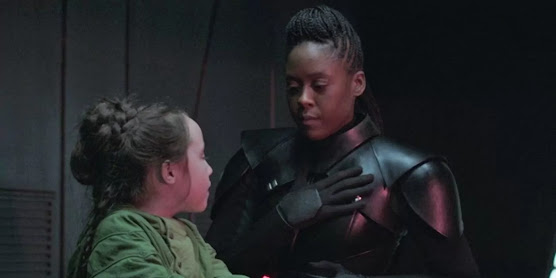 I honestly don't know when I last witnessed an actor so effortlessly FILL A ROOM with such quiet charisma. Truly.

Ingram's voice, alone, is like barrel-aged maple syrup being poured out and drizzled out onto POWERHOUSE PANCAKES. Her dynamic subtlety in her acting- the way she moves, speaks, and strategizes- is a work of art. I really don't think there's a better way of describing her: she just effortlessly, FILLS the room. In the most beautifully powerful way.

And this show would not have been the same without her playing the Jedi-hunting, protagonistic-antagonist 'Fifth Sister/ Reva.' She's got that magnetic strength of the perfect Star Wars villain, and she and her character's story arc were an impeccable fit for this.

4.) The chilling moment in Episode 2, realizing that Obi-Wan hadn't known that Anakin/Darth Vader was alive, and then seeing him find out. 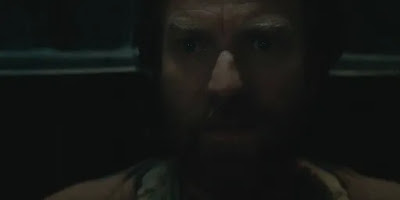 I thought that was such an excellent addition to the show, the way it took the audience on that ride with him. Because most of us probably didn't realize that after Obi-Wan had essentially left Anakin for dead after their battle in Episode 3, he went into isolation and wouldn't have heard much news of the Sith since.

I really appreciated that we got to see Obi-Wan haunted by Darth Vader's existence, and have to wrestle with that and their past together throughout the series, until he eventually gets some of his mojo back.

Overall, I thought it was a very well done series and I enjoyed it immensely. 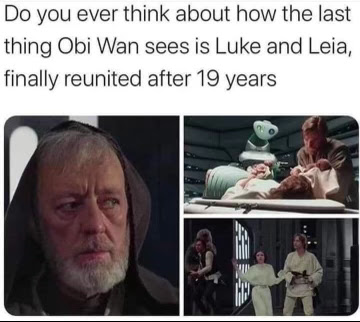 And after having watched it, I saw this meme online, and it made my heart happy.

My friend Bridget gave me this recipe last year while I was stuck at home in quarantine, when Luke and Vienna had covid. I spent those two weeks making a lot of new recipes, some of them were like this one- soups and snacks that were healthy and immune supportive; and some of them were things like Mango Margaritas or 'How fattening can I make a cookie?', because I was super bored I believe in balance.

Anyway, we ended up really liking this soup (those of us who could taste and smell it, at least) and I still love to make it, especially when we are fighting off sickness. The recipe comes from the Runner's World Cookbook, so obviously it helps to have amazing friends like Bridget who ARE runners, otherwise I never would have been inclined to open a book with that title and make a recipe out of it. (Because when you're basically built like Jessica Rabbit, you come to terms with the fact that God clearly did not ergonomically build you for running, and some of us are more than ok with that.)

This Indian-inspired soup is chalk-full of superfoods with minerals and vitamins that boost energy and immunity, and have anti-inflammatory and detoxifying properties. It's also dairy-free, gluten-free, and vegetarian. I've slightly changed it from the original recipe to make it creamier (more coconut milk!) and more flavorful (extra curry!), and with more kale (Who am I?!) but feel free to mess with all the ingredients yourself and follow your heart.

And speaking of getting sick! Zinc spray has been one of my main go-to's for sore throats and coughs for years now, and it's amazing. Zinc is proven to be so good for your immune system, metabolism function, and your sense of taste and smell. Taking it in the form of throat spray helps soothe the pain and is a fast delivery system for that immune support.

Get it on Amazon HERE to be extra prepared for cold and flu season.

Well, that's all for now, folks. I hope you're staying healthy(ish) enough to enjoy autumn being her most beautiful self for the next... well, Christmas stuff is already out at Walmart, so... maybe another 5-10 minutes?